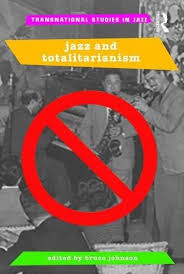 My first contribution to Routledge’s Transnational Studies in Jazz Series, both, as editor advisor, and an author has been published in the Jazz and Totalitarianism (2017), edited by Bruce Johnson. My article, titled “A Kind of ‘in-between’: Jazz and Politics in Portugal (1958-1971)”, explores the use of jazz as a form of protest and a symbol of freedom during the Portuguese right-wing colonialist Estado Novo regime.

The article will investigate the use of jazz music as a form of protest against the Portuguese Estado Novo (New State) regime and its colonial policies (1958-1961), and a symbol of freedom to configure new social realities in Portugal (1971-1974). In 1958 Salazar’s regime of Estado Novo, in response to international pressure eased repression and promoted ‘free elections’ to give the illusion of a free country. In this context, students at the University of Lisbon founded the Clube Universitário de Jazz (CUJ; University Jazz Club). The Portuguese police closed it in 1961 after the first signs of the war of independence in Angola. In 1971, during Caetano administration, Portugal hosted an important international jazz festival. Although state-sponsored, it became a space of political resistance for thousands and led to the arrest of American bass player Charlie Haden. This article will analyse jazz discourses and practices in Portugal during these important historical moments: 1958 and 1971.